In some ways, the insides of things are most impressive, showing the details of construction and engineering.  Some car hoods just have to be lifted, and doors opened to get the whole picture.  The face of a clock is only a small representation of the mechanical parts that run it.
So, building the deck top was a bit sad as part of the interior is now permanently closing, hiding some of the previous work.  Below is a view of how the boat looked at the stage of adding long stringers to the cross frames.

But time marches on, and this is the year the boat needs to be finished.  Here is the way it looked with the top frame work completed.

As done on before on the hull, I first cut 3 1/2″ planks, this time from 3/8″ Okume marine plywood.  Then, the edges  were routed with tongue and groove cutters, which allowed easier bending in both length and width.  This kept the surfaces lined up for gluing, which made fairing easier.

Below shows the first planks being positioned and screwed down.  I later remove all of the screws and fill the holes with epoxy.

The photo below shows the plywood pieces covering the bridge between the dash and the front jump seat.  The blue tape is there to catch any glue that might squeeze out.

More pieces are shaped and added.  Here the blue tape is holding them together temporarily. 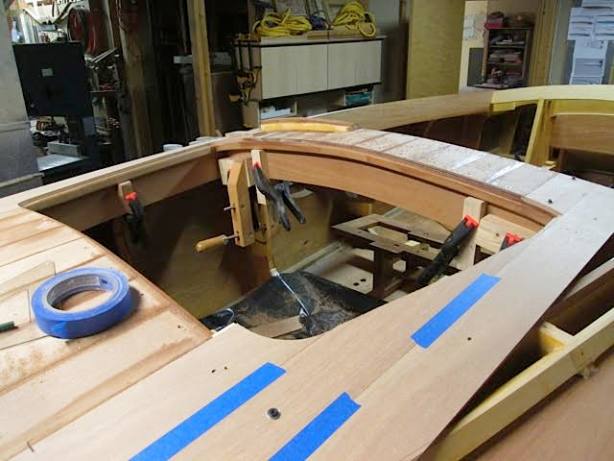 When the corner pieces were temporarily screwed in place, I used a self-guiding flush cutter to follow the contour of the curves. 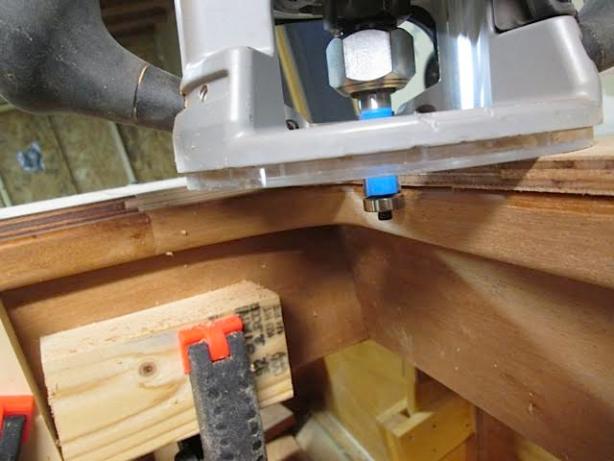 To inset the curved ledge for the hard top, I routed a cove shape on the plywood top.

Then the pieces were turned over on the bench to rout a second cove from the bottom side.  When turned right side up again, I finished with a small flush cutter to trim the edge square again, completing a 1/2″ lip which follows the curved outline.

Next, I made the tongue and groove pieces for the hard cover, and added plastic underneath before gluing them to the frame.

The boat is still a long way from being done, but this step completed is kind of like getting Oral Pathology done in dental school.  It is a great relief.