Integrity can be defined as: the quality of being honest and fair, adherence to a moral or artistic code, holding together, being complete or whole.  Most success just comes from enduring preparation, and stands on the quality of the foundation laid.  If work is done with integrity, it will be sound and complete.
It reminds me of a cool, clear Friday evening in October of 1971.  I was in the stands at a Concord High School football game, the only year I did not play on the team.  As high school friends sometime do, they tend to encourage behavior not strictly endorsed by the Establishment.  This evening it was an invitation from a friend with a pickup truck, to take TP to our orchestra teacher’s home and gift wrap his trees and house.
I imagine the discussion with my dad about the evening plan was rather vague, and shortly after the game, half a dozen of us were off to the grocery store.  Then the guy in the truck dropped us off at the appointed house, and said he would be back in a few minutes, waiting just around the corner.  We started the work at hand.
A few minutes came, the pickup truck returned, and just as we were doing the finishing touches, another car pulled up behind him with some lights flashing.  All of a sudden, the pickup truck with those friends, did not seem like my best option to get home.  I also was not interested in adding a police report or a trip to the station to the explanation I would have to give when I got home.
Fortunately, I had been running cross country that fall and was in the best running condition of my life.  I took off down a different road out of the subdivision, and settled in to a quick run with a bit of moon to see by.  I have often wished I had a stop watch going that night, because with the running training I had done that year and fueled by the adrenalin of fear, it seemed effortless.  This was preparation at its best, and I suspect it was the fastest seven miles I have ever run.
Upon arriving at home, I quickly got in bed and went off to sleep.  The next morning, I got up, ate breakfast, and walked … across the neighbors lawn,  through the woods past the Junior High, and over the bridge at Yellow Creek, up the hill to Concord High School.  It seemed a bit higher than normal.
At the school, I climbed up the steps to the bus that Saturday morning, almost exactly 44 years ago, which was headed off to the Regional Cross Country meet where I was scheduled to run.

My coach, Dale Kelly, was optimistic for my chances, because I had won the Northern Lakes Conference two weeks before and qualified high in Sectionals.  I had not mentioned the events of the previous twelve hours.
In contrast to the evening before, the cross country race was only two miles, and it was easy to see the course marked out for us.  I started strong on my normal pace, but the pain that usually waited to the end came on early. It was apparent that under the surface where a good kick usually waited, there was no reserve left.
I had not strictly adhered to the code of sports preparation, and the result was a disappointing waste of perfectly good preparation.  That boat “did not float.”
This, I am hoping to avoid with the current boat building project.  The stakes are higher.  Any volunteers for the first ride?  I worked hard to strengthen the transom, the cross frames and the under structure so that it would hold together, and be solid in action.

Even after a boat is holding together well, it is not complete.  Making it look beautiful requires the same quality of preparation.  A fair line or a smooth surface may be so easy on the eyes as to be unremarkable, but a lumpy contour screams for attention and sticks out like a sore thumb. Success all depends on the the structure underneath.
I am currently working at covering the front “jump seat” with a hard top.  The first step was defining the outline with a curved moulding.  Here are the patterns I made to start with.

Below is the corner piece being glued in place, with masking tape to prevent glue squeeze out from affecting the finish later. 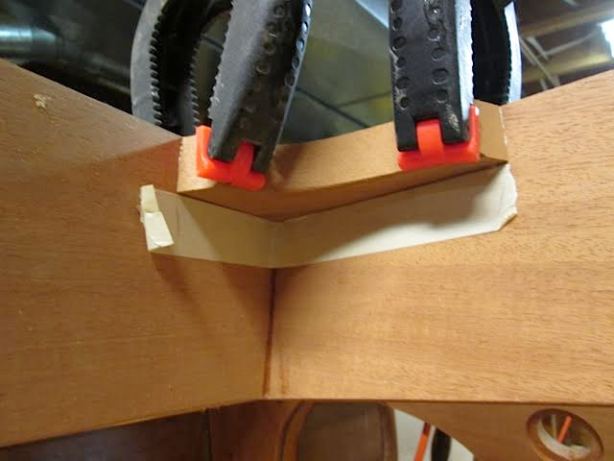 Next, I added the curved connector moldings.

Then I refined the inner curve with some carving and sanding, joining the lines of the corners and sides.

And last, I built the frame for the removable hard top, inside the jump seat moldings. 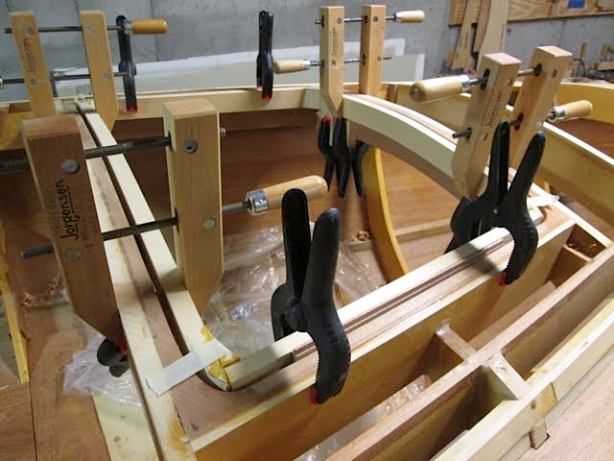 After some fairing, it is about ready to cover with the deck planks.

Below is the boat as it stands, ready for decking. 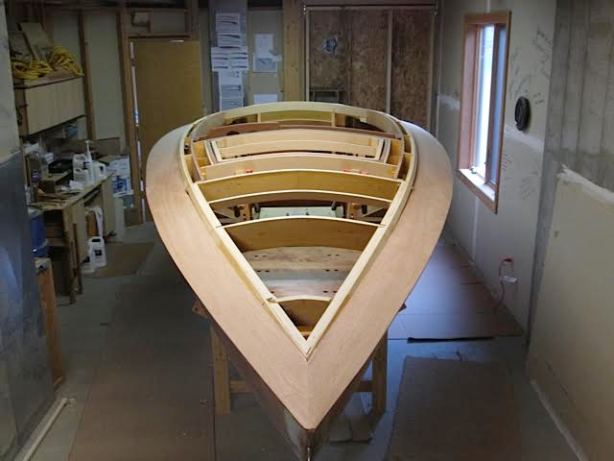 My daughter Adrienne came to visit recently, and then wrote of reading Psalms 33:5 from The Message:
“God’s word is solid to the core – everything He makes is sound inside and out. He loves it when everything fits, when His world is in plumb line true.”
She said, “It is so neat how the intricacies of the inside of the boat, which will not be seen by most people, have been made with such integrity.”  This, she thought, reflects the character of God.