A boat, like much else in life, cannot be all things to all people.  It must be focused to be the most successful in its intended purpose.  This boat became a speed boat instead of a sailboat mainly because I thought it would be used more by my family in years to come.  Beyond that, the boat was intended to show respect to the beautiful wooden boats from the early part of the last century while hoping to improve their ride in the choppy water of the larger inland lakes and also Lake Michigan.
First, it had to be made of wood with the same passion for craftsmanship, but also inspiring as a stand-alone object of beauty.  Who can resist going closer to inspect the restored Chriscraft, Century, Hacker or Garwood runabouts that are occasionally found on the waters of Long Lake, Crystal Lake, or Portage Lake, just to name a few?

The length was set at 19 feet—to fit in my basement shop space—which should allow comfortable room for four adults, and the capacity to add a few more on a calm water sunset cruise.  The hull was to be of moderate plus dead rise, and narrower than many modern boats.  It would have to give up some lateral stability at rest, but slice through the waves better instead of pounding so much as some of the old runabouts did.  Of course, it needed enough power to pull a skier and to generally go fast…

This steered me toward an outboard motor instead of a traditional inboard, both for easier adjustment of trim in rough water, and to give a better power to weight ratio for improved fuel economy.  I considered an IO (inboard/outboard) but the extra weight of the stern drive unit was too heavy for the water displacement of the designed beam (width) and draft (depth in water).
Finally, the boat was intended to be able to navigate through the Portage Lake Channel out to Lake Michigan on an average day, especially as the sun goes below the “three finger line.”  This line is found by holding your arm straight out with fingers starting at the horizon.  Each finger represents about 10-15 minutes until sunset, which is close enough on vacation. 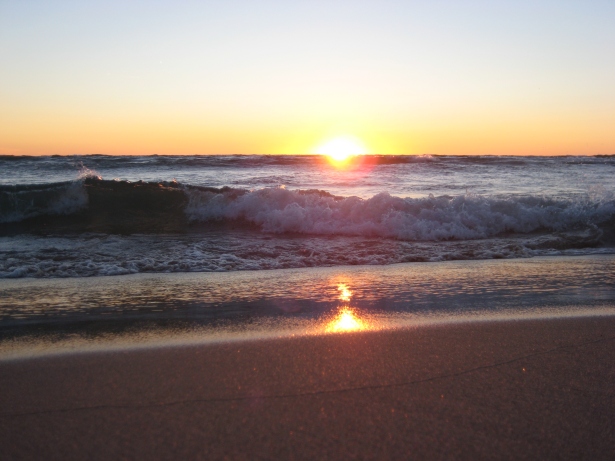 Watching the sunset from the shore is always reflective and calming.  To see the clouds transform from white and grey to the orange pink, with the sun playing through them is stunning.  But gently bobbing in a boat, watching the golden flecks on the wave crests of the steel blue water, is even more dramatic.  When the water turns slate grey, the wave tips dull to the color of salmon, and the sun pancakes in the western sky, it is time to think for a moment about eternity, and then go home.

All of nature tells of the Creator, but a sunset is a special window to heaven.

One thought on “Defining the Boat”