So how did this dream of a lifetime actually move from the back burner into forward motion? A year ago, after coming to the end of a volleyball coaching chapter, I had one of those rare and brief periods with a bit of unaccounted freedom to sketch and think. About that time, I was talking with my neighbor Doug Martin who told me that my furniture probably looked “fine” to most people. But then he asked, “When was I ever going to build something that roars and races fast?” That question did make my custom cherry, curly maple and ebony stairway, and a tongue and grooved, mortised and tenoned, book-matched curly maple dresser look pretty tame.

As I was mulling this thought over in my mind, I also was telling some friends that I was considering building a boat, but that the thought of it might just be a midlife crisis. One of them was quick to correct me, saying, “Don’t worry, you’re not that young.”

That was enough kick in the pants, and so one day I told a friend Jeff Margush that I was planning to build a boat and had done some pencil drawings. He invited me to come over to his house and put the lines into a 3D CAD drawing. This began a design collaboration of creating lines, making models and reviewing the shape that lasted around four months.

Our wives called these times “play dates,” but they wondered why it was mostly quiet during the process. If you have to ask, you might not understand. The work we did together definitely created a better boat design than what I would have accomplished on my own. 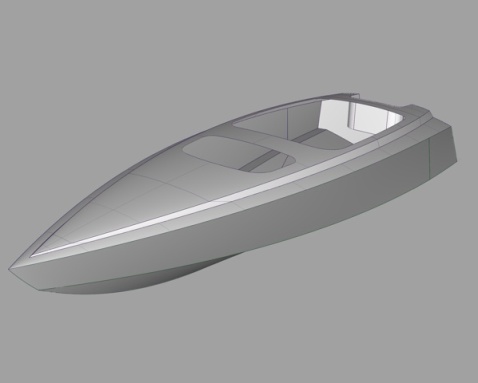 Anyone who starts an adventure with the hope of valuable treasure, knowing the risk of pain or loss, is never really old.