Around 3 years ago, I started on the 20′ speed boat, thinking it might be a one year project. I first made some models and some half hulls, before launching into the full scale parts.

The problem was that I needed to learn so much as I went along, and the mistakes from inexperience caused plenty of detours. But finally, in the spring of 2016, it became realistic that the boat was ready to move out. The basic shell was complete, along with the mahogany and maple veneer, and the wood work got a coat of thinned varnish sealer. This started waking up the color. 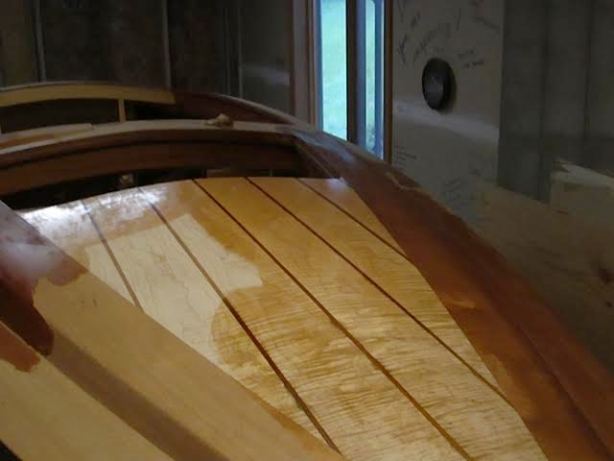 Once the hull had initial protection from water, Jed Long and Jeff Margush helped to beef up the stands it sat on, and brace them diagonally.

We even put in sliding castor bases that allowed it to move well across the floor and clear the sill plate at the wall.

Finally the day came for the moment of truth.  We had checked off the strength and safety requirements from neighbor, Mr. Fix-it Florea (Don), who provided the heavy duty castors, plywood for bracing, strapping to hold it together, and much thought about how to make the whole move as easy as possible.  Our first step was turning the hull 45 degrees.  That is Don on the front left, not letting the foot cast slow him down!

Then Jeff Margush was voted as the one most capable to cut the legs off of the bottom with a Sawzall, so it would fit through the wall opening.

Then it was time to start moving the speed boat out the hole in the wall. There wasn’t much room to spare, so we moved slowly and carefully.

The system of riding on rollers turned out to work very well, and soon we were free of the house. It needed some help when it crossed the sill plate.

And then, the boat was out of the basement, temporarily covered due to some drizzle.

Soon, we carried it up the hill, and prepared a trailer for temporary transport. The strakes (spray rails) did not fit in between the bunks of the trailer so we just padded the trailer as well as we could, with a cheap mattress, some sleeping bags and some old blankets.

Finally, the boat was positioned on the trailer, and there was a great sense of relief that all had gone well, with no harm to the hull bearers or to the hull itself.  This was also due in part to a friend Andrew Alger, a engineering test lab operator, who knows a lot about a lot and is not a teenager.
During the process, he helped build the moving framework, but also gave us a great surprise gift.  He took a time-lapse video of the whole move, which will be available to view soon.  Thanks, Andrew, and all the rest of you who made the day so successful.  I will never forget. 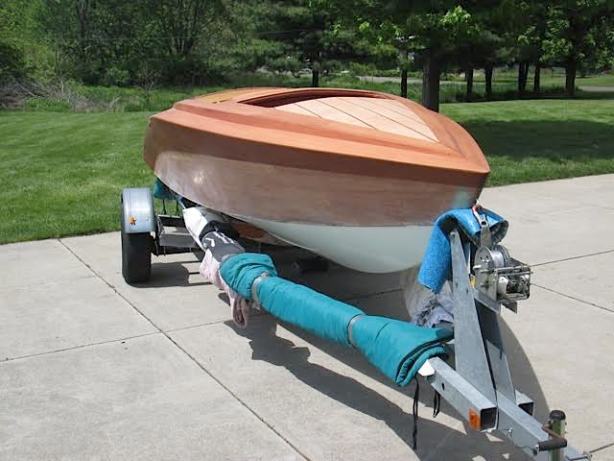 2 thoughts on “Boat Going Through the Wall”